Dubai is a member of the United Arab Emirates, the cluster of sheikdoms along the Arabian Sea. Located at the crossroads between East and West, the emirate's long-standing trading tradition has for centuries brought visitors from throughout the Middle East and neighbouring regions. Now modernized, Dubai continues to attract many with its international facilities and its exotic, yet cosmopolitan lifestyle. Dubai has the best prices in the Arab Gulf states for gold, electronics, perfumes and is a tax-free city. It also has good beaches and excellent resort hotels. The town was the residence of the British political agent for the former Trucial States from 1954 until 1971. Known as the Venice of the Gulf, Dubai is the chief port and commercial center of the United Arab Emirates.

Jordan's only outlet to the sea, Aqaba is a popular holiday destination - with a superb climate and beach-edged Red Sea waters that boast some of the world's finest coral reef diving. Aqaba is the only seaport of Jordan. Visit fabled Petra, perhaps the finest archaeological site in the Middle East. The great monuments of this Nabatean 'rose-red city, half as old as time' were hewn from living sandstone some 2,000 years ago, and rediscovered only in 1812. Nearer Aqaba is the spectacular scenery of Lawrence of Arabia's Wadi Rum, where rugged jebel mountains rise sheer from the desert sands.

The Suez Canal links two oceans and two seas the Atlantic and Mediterranean via Gibraltar to Port Said, and the Indian Ocean and the Red Sea via Bab Al Mandab and the Gulf of Suez to the port of Suez. It is the longest Canal that has no locks, it can be widened and deepened at any time when necessary. The Suez Canal's strategic importance lies in the fact it is essential for world trade and greatly shortens the distance between East and West. The distance between Tokyo (Japan) and Rotterdam (Holland) is shortened by 23% if it goes round Africa.

The Suez Canal links two oceans and two seas the Atlantic and Mediterranean via Gibraltar to Port Said, and the Indian Ocean and the Red Sea via Bab Al Mandab and the Gulf of Suez to the port of Suez. It is the longest Canal that has no locks, it can be widened and deepened at any time when necessary. The Suez Canal's strategic importance lies in the fact it is essential for world trade and greatly shortens the distance between East and West. The distance between Tokyo (Japan) and Rotterdam (Holland) is shortened by 23% if it goes round Africa.

Piraeus is the seaport for Athens, the capital of western civilization, which boasts a fantastic mix of classical ruins and vivacious modern life. Climb the hill of Acropolis to wonder at the Parthenon, join the lively Athenians in Constitution Square, and find a welcoming taverna for spirited bizouki music, plenty of ouzo to drink, and energetic Greek dancing. Piraeus is the largest harbor in the country. The white chapel of St. George at its summit has a theater bearing the same name. The hill of Nymphs is the site of a planetarium, which is located above magnificent Thesseio temple. Among all of these hills, Acropolis is the one that glorified Athens and the whole Greek world and became the symbol of the western civilization. Bays and small rocky or sandy coves dot the area and during the summer are filled with Athenians and foreigners enjoying their beauty.

Athens at a Glance - 3 hours

Athens - The Athenian Riviera & the Temple of Poseidon - 4 hours

Valletta is the capital of Malta. This remarkable fortified city with its massive bastions followed the most advanced Renaissance ideas in town planning, with streets laid straight on a grid looking over the Grand Harbour. Outside the 'City Gate' is the famous Triton Fountain. 'City Gate' has public buses and vendors selling soft drinks and all sorts of traditional fresh Maltese bread and sweets. Freedom Square shows an extraordinary capital with buildings of fine architecture of different tastes and styles ranging from the Mannerism to Baroque to Rococo to Neoclassicism. Valletta is a fascinating city for wandering around looking at what used to be the Knight's own cathedrals and Auberges. The city's backbone is Republic Street, which runs straight through the city center to Fort St. Elmo. Valletta has several narrow, steep side streets decorated with traditional Maltese pastel colored balconies and a statue on almost every street corner. There are plenty of shops, cafes, and restaurants to choose from.

Situated on the western shore of the Strait bearing its name, the port at the entrance to Sicily is one of the deepest and safest in the Mediterranean. The city's was rebuilt low buildings to minimize the danger of earthquakes. This gives the center a pleasant, open townscape combining sea, sky and hills. Train-ferries, car-ferries and hydrofoils make the connection across the Strait of Messina to Reggio Calabria on the Italian mainland. Among the main attractions is the Norman-Romanesque cathedral, with an adjoining bell tower. The works of Renaissance painter Antonello da Messina and two large Caravaggios can be seen at the Museo Regionale - which features an interesting collection of material salvaged after the 1908 earthquake. From Messina, excursions are possible to Taormina, Mount Etna and across the Strait to mainland Italy.

From Naples visitors can explore the rugged Amalfi coast, Italy's most romantic stretch of coastline. Near Amalfi is the resort of Positano, where visitors enjoy strolling through streets and shopping in small boutiques. Take an excursion to legendary Pompeii, an ancient Roman city covered and preserved by the debris from the violent eruption of Mount Vesuvius in 79 A.D. The monuments of this city are considered to be among the finest of any ancient city in Europe, and visitors can spend a day here learning about life in a Roman town during the first century A.D. The Cathedral of San Gennaro, a fine medieval building, has one chapel containing the tomb of Charles of Anjou, while another houses the cathedral's gold and silver treasure. Among the Christian underground burial vaults discovered in an area of suburban heights, the Catacombs of San Gennaro can be visited. Capodimonte Park - a well-kept tropical park - has a royal palace built by Charles III in 1738 that now houses Naples' picture gallery, the National Museum of Capodimonte.

Naples: The City of Naples - 8 hours

Civitavecchia is the port city for Rome. Rome has always been and remains the Eternal City. With its splendid churches, ancient monuments and palaces, spacious parks, tree-lined boulevards, fountains, outdoor cafés and elegant shops, Rome is one of the world’s most attractive cities. Among the most famous monuments is the Colosseum where spectators watched combats between muscled gladiators and ferocious animals. Stop to see the remains of the Forum, once a political and commercial center. Rome’s squares were enhanced with such imposing structures as the Vittorio Emanuele Monument and grandiose fountains like the Fontana di Trevi. Awe at Christendom’s most magnificent church, the Sistine Chapel. The busy square Piazza Venezia is easily recognized by its imposing Vittorio Emanuele II Monument. Take a stroll to Rome's famous Trevi Fountain. Vatican City is the site of lovely St. Peter's Square and St. Peter's Basilica, where for 200 years, Renaissance masters worked on its design and created an unparalleled masterpiece. Visit Vatican Museum.

Rome and the Vatican City: 8-9 hours 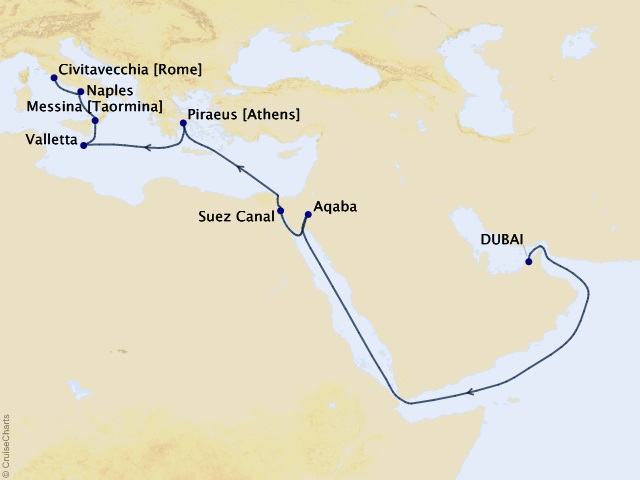 Itinerary subject to change without notice. Please confirm itinerary at time of booking.

Rates are cruise only, per person, based on double occupancy. Taxes, Fees and Port Expenses of $385, transfers, and airfare (unless otherwise stated) additional for all guests. Rates are subject to availability and may change without notice. Restrictions may apply.

Prices are per person, based on double occupancy. Airfare, transfers, Taxes, Fees and Port Expenses additional.</p/>

See applicable Princess® brochure for terms, conditions and definitions that will apply to your booking.

All prices per person and in USD unless otherwise stated.

Reference this number when contacting our agency so we may better serve you. Also keeping this number handy will allow you to locate this document again quickly.

Information and pricing is subject to change without notice. While we do our very best to ensure that information and pricing appearing in this website is complete and accurate, we cannot be responsible for incomplete and inaccurate representations, which may or may not be under our control. In the event of a pricing error, misrepresentation or omission, we reserve the right to adjust the pricing or make any other corrections.