Business Class airfare available for only $2,500.

Civitavecchia is the port city for Rome. Rome has always been and remains the Eternal City. With its splendid churches, ancient monuments and palaces, spacious parks, tree-lined boulevards, fountains, outdoor cafés and elegant shops, Rome is one of the world’s most attractive cities. Among the most famous monuments is the Colosseum where spectators watched combats between muscled gladiators and ferocious animals. Stop to see the remains of the Forum, once a political and commercial center. Rome’s squares were enhanced with such imposing structures as the Vittorio Emanuele Monument and grandiose fountains like the Fontana di Trevi. Awe at Christendom’s most magnificent church, the Sistine Chapel. The busy square Piazza Venezia is easily recognized by its imposing Vittorio Emanuele II Monument. Take a stroll to Rome's famous Trevi Fountain. Vatican City is the site of lovely St. Peter's Square and St. Peter's Basilica, where for 200 years, Renaissance masters worked on its design and created an unparalleled masterpiece. Visit Vatican Museum.

Painting with Caravaggio for Kids

From Naples visitors can explore the rugged Amalfi coast, Italy's most romantic stretch of coastline. Near Amalfi is the resort of Positano, where visitors enjoy strolling through streets and shopping in small boutiques. Take an excursion to legendary Pompeii, an ancient Roman city covered and preserved by the debris from the violent eruption of Mount Vesuvius in 79 A.D. The monuments of this city are considered to be among the finest of any ancient city in Europe, and visitors can spend a day here learning about life in a Roman town during the first century A.D. The Cathedral of San Gennaro, a fine medieval building, has one chapel containing the tomb of Charles of Anjou, while another houses the cathedral's gold and silver treasure. Among the Christian underground burial vaults discovered in an area of suburban heights, the Catacombs of San Gennaro can be visited. Capodimonte Park - a well-kept tropical park - has a royal palace built by Charles III in 1738 that now houses Naples' picture gallery, the National Museum of Capodimonte.

Naples: The City of Naples - 8 hours

It is known for its beautiful beaches and crystal clear waters of the Ionian Sea. It has a small, but prosperous fishing port. There are many hotels and restaurants and the town is ten minutes away from another of Sicily's most important tourist destinations Taormina.

Corfu's unique scenery, with gentle green hills and luxuriant southern flora, makes it one of the most beautiful of all Greek islands. Many beautiful buildings can be seen in Corfu Town. Corfu is a popular holiday destination for vacationers from all walks of life who come to enjoy mild climate, calm blue-green water, rugged mountains, hidden coves and miles of sandy beaches. A number of historical sights range from old fortresses and mansions to cathedrals and palaces. Corfu Town is surrounded by arcaded Venetian buildings. The Spianada is considered to be the largest square in Greece. Explore the narrow streets of Old Town. See Town Hall and the 300-year-old Church of Saint Spyrídon; a silver sarcophagus contains the remains of the town's patron saint. The Royal Palace - a neo-classical mansion - holds on its upper floor the Museum of Byzantine and East Asian Art. The Archaeological Museum has displays of artifacts discovered on Corfu. The Old Fortress, an impressive 14th-century Venetian structure, is now used as a popular venue for concerts.

Katakolon is a port admired for beautiful beaches. Equally important, Katakolon is the gateway to Olympia, the great Panhellenic sanctuary. The site of ancient Olympia is situated at the foot of wooded Mount Kronos in an area of gentle hills; excavations began in 1875 and are considered one of archaeology’s great achievements. A direct consequence was the revival of Olympic Games by Baron Pierre de Coubertin; the first modern games were held in Athens in 1896. Today, visitors to Olympia are overwhelmed by the impact of ancient remains and their significance. The site’s most important excavations include numerous monuments, such as Temple of Zeus in the Sacred Precinct, Treasuries, and Stadium. There is an excellent Archaeological Museum with a large collection of bronzes, pottery and sculptures unearthed during the excavations. The main reason for a visit to Katakolon is the trip to Olympia. Those guests who wish to remain in Katakolon will enjoy its unhurried atmosphere and the friendliness of the people.

Santorini is everything that has made the Greek islands legendary. The world famous island of Santorini is the southern most island of the Cycladic group in the Aegean Sea, and is located north of Crete. Its population is distributed among thirteen villages and just exceeds nine thousand. The marvelous dry climate and unbroken sunshine create year around conditions which are perfect for observation, photographs and videos under an extraordinary variety of natural lights and colors.

Rhodes is one of Greece’s favored vacation centers and was an important cultural center with a well-known School of Rhetoric attended by such greats as Cicero and Caesar. Rhodes' most famous attractions originated with the Knights of St. John, who occupied parts of the island from 1310 to 1522 and left a medieval town, dominated by the Palace of the Grand Masters and Knights' Hospital, which houses an Archaeological Museum with interesting exhibits of national archaeological finds. Rhodes has inspired many artists. The Old Town offers shopping opportunities and lively nightlife. At Mount Filerimos a church has been built on the site of an ancient temple. A popular excursion is to the charming village of Lindos. Its premier attraction, the ancient acropolis, stands atop sheer cliffs. Walls of a 13th-century Crusader castle enclose the site. Today, the winding path up to the acropolis is lined by stalls, where locals sell lace tablecloths and souvenirs. Mandraki Harbor's entrance is flanked by stone columns topped by figures of a stag and a hind, the town's heraldic animals.

Visitors come to Kusadasi for beaches and nearby ruins of Ephesus. The major attraction is the archaeological site of ancient Ephesus, considered to be most important in Turkey. The history of this ancient city dates back to 10th century BC; many remarkable structures seen today are result of an excavation and restoration program. Along a white marble road grooved by ancient chariot wheels, the two-story Library of Celsus presents a striking sight. There are temples, houses of noblemen, and community buildings lining ancient streets. Nestled in the mountainside is a 25,000-seat amphitheater, still used for performances during Festival of Culture and Art. Bible buffs may know Ephesus as inspiration for St. Paul’s Epistle to Ephesians and the site of one of the first seven churches of Asia Minor. Treasures are kept in the Seljuk Archaeological Museum. Among the better-known ancient sites near Kusadasi are ancient Miletus and Dydima. Remains include a well-preserved Roman theater at Miletus and Dydima's sacred temple of Apollo.

Kusadasi: The Greco-Roman City of Ephesus & the Wine-making Village of Sirince - 7 hours

Piraeus is the seaport for Athens, the capital of western civilization, which boasts a fantastic mix of classical ruins and vivacious modern life. Climb the hill of Acropolis to wonder at the Parthenon, join the lively Athenians in Constitution Square, and find a welcoming taverna for spirited bizouki music, plenty of ouzo to drink, and energetic Greek dancing. Piraeus is the largest harbor in the country. The white chapel of St. George at its summit has a theater bearing the same name. The hill of Nymphs is the site of a planetarium, which is located above magnificent Thesseio temple. Among all of these hills, Acropolis is the one that glorified Athens and the whole Greek world and became the symbol of the western civilization. Bays and small rocky or sandy coves dot the area and during the summer are filled with Athenians and foreigners enjoying their beauty. 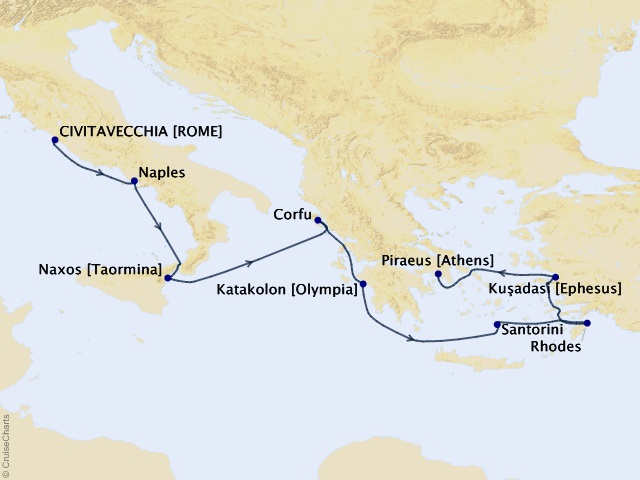 Itinerary subject to change without notice. Please confirm itinerary at time of booking.

Fares are in US dollars, cruise only, per person, based on double occupancy and include fees/taxes. Price does not include airfare, transfers and airline government fees and taxes.

Remarks:
All fares and offers are for new bookings only, are capacity controlled and subject to availability, may not be combined with other offers and may be withdrawn at any time without prior notice. Fares are in US dollars, cruise only, per person, based on do

All prices per person and in USD unless otherwise stated.
Offer ID:
1445686

Reference this number when contacting our agency so we may better serve you. Also keeping this number handy will allow you to locate this document again quickly.

Information and pricing is subject to change without notice. While we do our very best to ensure that information and pricing appearing in this website is complete and accurate, we cannot be responsible for incomplete and inaccurate representations, which may or may not be under our control. In the event of a pricing error, misrepresentation or omission, we reserve the right to adjust the pricing or make any other corrections.